30th Sept. 2011: Dipl.-Ing. Christian Brendle receives the Viktor und Mirka Pollak-Prize on Medical Engineering 2011 for his excellent diploma thesis “Patient orientated automation of the therapy with the Extracorporeal Membrane Oxygenation". Prof. Meyer-Ebrecht awarded the prize on the occasion of the official ceremonial act on the 50-years existence of the Faculty of Electrical Engineering and Information Technology at the RWTH Aachen.

The Prize is according to regulations financed by the Viktor and Mirka Pollak-Fonds for medical Engineering , which is dedicated to the aid of interdisciplinary and medical-technical research. In 2004 the Fonds was founded by Mrs. Mirka Pollak. The fond follows the legacy of her husband Viktor Pollak . Since 1968 until shortly before his death in 1999, he was engaged in pioneering work in "Biomedical Engineering" at the University of Saskatchewan in Saskatoon, Kanada. 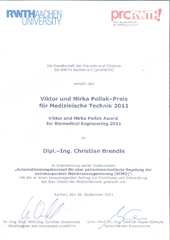